THROUGH THE CAMERA’S LENS

Although the Battle of Cantigny is best known as the first American offensive in World War One, it was also the site of another first, one that would profoundly change the way we view history.

The way in which the public experiences war has changed enormously within the past century. Prior to the work of Matthew Brady during the Civil War, military conflict had seemed very far away to the American people. By contrast, the Second World War brought black and white images into people’s homes. By Vietnam, full-colour motion pictures were no longer confined to the theatres. Now, anyone can find footage of current conflicts through their smartphones, wherever they are. In parallel to public consumption, combat photography itself has also evolved. Historians in years to come may just as likely be studying images of war torn areas taken by teenagers on smartphones, as they will be looking at official Army photographs. However, the two world wars are different. These two pivotal events in human history will forever be remembered through work primarily produced by the U. S. Army Signal Corps, and that all started in a tiny French village—Cantigny.

Private Edward R. Trabold was attached to the 1st Infantry Division. He had photographed the front lines around Cantigny before combat began, with his images being used to construct mock battlefields and plan attack strategies. Then at 2am on May 28, 1918, he moved to the front lines once again, this time to make history as the first Signal Corps combat cameraman.

Trabold and his commanding officer, Captain Paul Miller, moved through the war-torn woods south-west of Cantigny early on the morning of the attack. Upon reaching U.S. lines, the first images were made of the U.S. First Division watching the shelling of the town. Their photographic duties would make it necessary for them to move beyond the men. They were to photograph the troops going over-the-top at 7am. Shelling was heavy and coupled with heavy camera equipment and the need to stop to help casualties, the pair barely made it into position on time. Trabold later recalled that this was his first encounter with dead and wounded men. However, much like the Signal Corps cameramen that would photograph the next war, he had a clear objective. He later wrote, “I then and now wish that we never had to see or take such pictures; but this is the fortune of war and history would not be complete without it.”

Miller almost became a casualty himself. Moments after Trabold had expressed concern about their slow progress and remarked that this particular spot was “not a healthy place to be,” a shell landed three feet directly in front of the Captain. It was a dud. 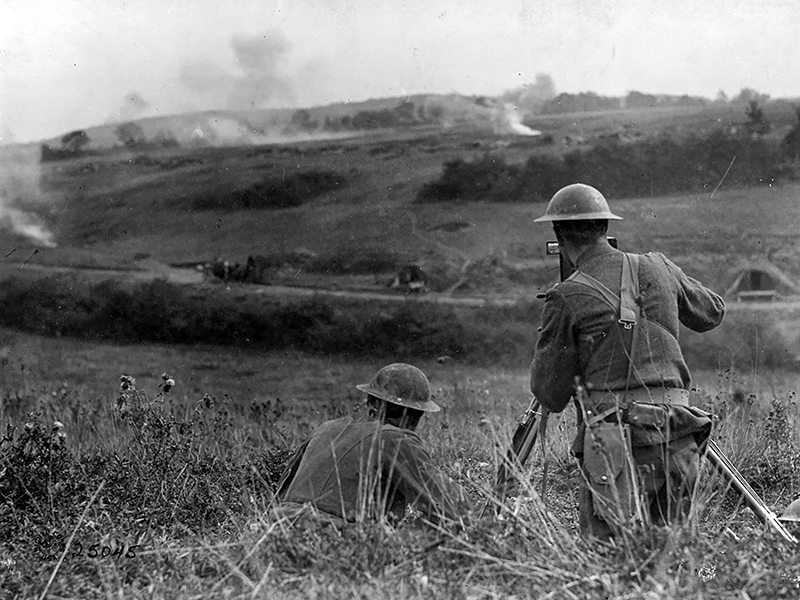 Accompanied by Miller, Trabold then made the first Signal Corps combat images. They were of tanks and the men of the 1st Infantry Division storming towards Cantigny.

As an officer in the 167th Signal Photographic Company would remind his men in the next war, photographs are worth nothing if you do not bring them back. The same held true for Trabold. After the attack had commenced, German artillery rained down on the American rear to prevent the mobilisation of reinforcements, ensuring a perilous return journey for the cameramen. The pair made their way down what would become known as “death valley,” briefly sheltering in a shell hole to avoid heavy artillery. After four near misses in quick succession, they left their cover. Trabold was hit. Although with one man a casualty, shelling was so intense that both men were frantically in search of their next cover. They fell into the closest dugout. Trabold remembers that Miller swore he would give twenty francs for a drink of good water. With that he got up to inspect Trabold’s wounds, and the Private claimed the twenty as his captain had been sitting on a canteen.

A machine-gun bullet had passed through Trabold’s ankle, but there was little other option than to continue the journey to the rear. They soon headed out but had not gone more than twenty-five yards before retreating back into the dugout after three near misses. A second attempt at leaving the dugout when the action quietened found Trabold a good distance ahead of Miller. The Captain called him back to examine a gas shell he had discovered, and reluctantly Trabold accepted. This saved his life, as a salvo hit where he had been stood mere seconds earlier. They left the area double-time, their route taking them down hills, through barbed wire, intense artillery fire, brush and trees. The ordeal continued when they reached the aid station, as both men were forced to wear their gas masks for over an hour as chemical-shells fell on the hospital. Trabold moved about on his wounds to photograph the medical personnel.

Leaving for Mensil St. Firmin where their transport was located at four o’clock, and arriving at headquarters in Bonvillers at six, the pair were greeted as long lost ones. Headquarters was certain that they had been killed. They had made the first official Signal Corps combat pictures.

For men whose job it was to stand upright on a battlefield and make photographs, the casualty list for cameramen was relatively small. Throughout their involvement in the First World War, the Photographic Section only took seven wounded and one killed in action. First Lieutenant Edwin Ralph Estep was the only fatality, killed on 7 November 1918, four days before the war’s end.

Although their time in theater was short, by November 1918 Signal Corps cameramen had shot 860,000 feet of motion picture footage and 35,000 still photographs. A mere 15% of this was ever released. In total, almost one thousand rolls of film are currently in storage at the National Archives and Records Administration in the United States. These one thousand rolls, produced in less than a year by a handful of men, changed the way war would be documented and distributed for public consumption, forever.