In April 1945, the German western front was on the brink of collapse. Defeat was now inevitable, and the German Army was in full retreat. The 16th Infantry Regiment had pushed through the Harz Mountains region and advanced into Czechoslovakia on the 27th of April. For the next eight to ten days, action was mainly defensive. Patrols of varying size were sent out every day, resulting in the capture of a series of small villages with little or no resistance. George A. Flynn of Cannon Company remembered that his unit was “going through one town after another, like a bat out of hell.”

On the wet, misty morning of May 6th, the regiment moved out on the offensive again. Three battalions abreast, the regiment advanced eastward to the day’s objective, Falkenau. The 1st Battalion pushed on against little resistance until noon. Two thousand yards east of Vildštejn, however, B Company struck a detachment of battle-hardened German marines from the pocket battleship Admiral Scheer. The marines put up a fierce resistance, inflicting twenty casualties, including one officer and three enlisted men who were killed. The 2nd Battalion had one killed and seven wounded that day. To the south, the 3rd Battalion advanced with no resistance, taking a few prisoners from each small town until Kulsam was reached. There, the enemy was determined not to give up a bridge (which had not yet been destroyed) without a fight. K Company “came under grazing automatic fire and was pinned down” but managed to seize the bridge and remove all demolition charges before the bridge could be blown. By the end of the day, the regiment was still fifteen kilometers away from its objective and had suffered a total of fifty-one killed, wounded or missing in action. As it turned out, these were the last battle casualties of the war for the 16th Infantry.

Early the next morning, the regiment jumped off on what would be its last attack of World War II. It had advanced for little over two hours before Colonel Gibb, the regimental commander, received word by radio that all forward movement was to cease—the long-awaited order for which the regiment had fought since November 8, 1942. The war was over. “There will be no more guns, no more fear, and death that asks no questions no longer waiting around the next turn in the road,” Raymond Gantter of G Company wrote after the war. “Night sounds will be innocent, and there will be no new corpses in the woods and in the ditches by the hedgerows.” 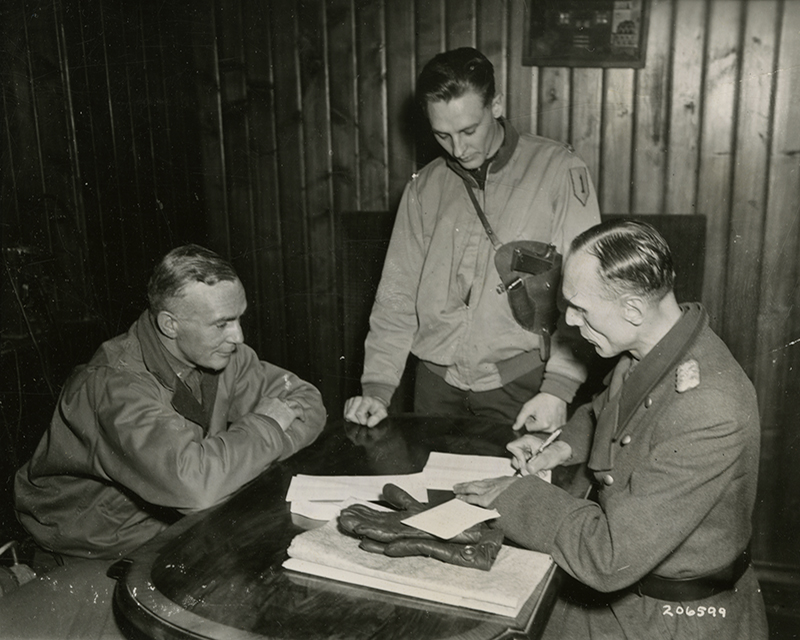 Lieutenant General Fritz Benicke, commander of German forces in and around Elbogen, Czechoslovakia, signs surrender papers for troops and equipment under his command.

V-E Day, or Victory in Europe Day, as May 8th became known, “was a beautiful day,” Joe Argenzio of M Company later said in an interview. “Everybody just sat there—didn’t say a word. The first thing I thought was, ‘Thank the Lord I got through it. And I can’t wait to meet the boys at the pub.’” Raymond Gantter had similar thoughts. After the war he wrote, “It [V-E Day] brings only a great weariness of relief, the sense of a heavy load sliding from tired shoulders. I’m still alive—that’s the important thing.”

But not all the men got through the war unscathed. In 443 days of combat, the 16th Infantry lost more than 1,300 officers and enlisted men. Over five times that number were wounded or missing in action. The regiment saw combat in the extreme heat of North Africa and had braved the bitter cold and snow during the Battle of the Bulge. It fought its way through the hedgerows of Normandy, breached the vaunted Siegfried Line and faced tough opposition in the dense, rugged terrain of the Hürtgen Forest. In the process, five 16th Infantrymen earned the Medal of Honor, and 92 received the Distinguished Service Cross. Countless Silver and Bronze Star medals were awarded. In short, the 16th Infantry ended the war with a record few, if any, other American regiments in World War II could match. Now, with the end of hostilities in Europe, the regiment would have to keep the peace in a postwar Germany, continuing its tradition of service to the nation.