THE FIRST TO FALL

In the early morning hours of June 6, 1944, the men of L Company, 16th Infantry Regiment, 1st Infantry Division, stepped inside their LCAs (Landing Craft Assault). They had been training for the invasion from the moment they arrived in the UK after fighting their way through North Africa and Sicily. They trained for the landings so often that the majority of men felt confident in their ability to face the enemy and win. But from the moment they stepped into the landing craft, they already may as well throw the timetable into the Channel.

It was 0700 hours, thirty minutes behind schedule, when five LCAs carried the men of Captain John Armellino’s L Company to the Fox Red sector of Omaha Beach and towards the jaws of death for many of these brave young men. The infantrymen were dropped in the middle of several rows of defences and in varying depths of water. So from the moment the ramps were lowered and the men started to jump into the cold waters, the only thing they saw was 180 meters of open beach ahead of them with sheer cliffs at the head varying in heights up to 60 meters. On top of the bluffs was the German strongpoint WN-60. This strongpoint was located a the F-1 Exit on Fox Red. It was called the Carbourg Exit and is the road leading to Le Grand Hameau. 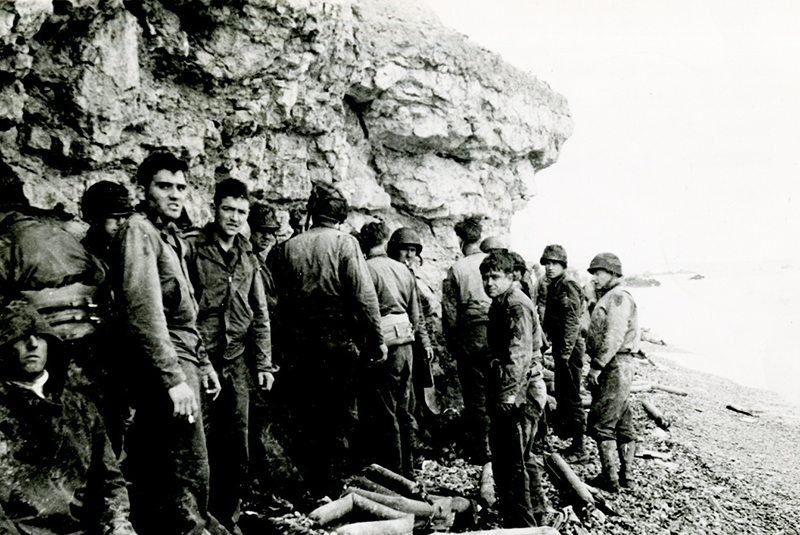 Men of the 3rd Battalion seek shelter at the foot of the rockly cliffs at the eastern end of the Fox Red sector.

From the moment that the Germans caught the LCAs in their sights, they started to unleash a deadly torrent of firepower onto the green replacements and battleharded veterans. The weapons on WN-60 that the 40 Germans stationed within it used, were two 75-millimeter antitank guns, a Renault tankturret and four mortar Tobruks and several machine guns which was further supplemented by two mine fields. From the moment that Fieldmarshall Rommel took command of Army Group B, the Germans started to fortify the Atlantic Wall, particularly in the Normandy region. Rommel told his fellow officers several times over and one time in private to Major Werner Pluskat, ‘’ Pluskat, in my opion it is in this very area that the Allies will land. If they do, you’re going to have to fight one of the toughest battles of your life.’’ When Pluskat asked him why he thought so, Rommel replied: ‘’Because this is exactly the type of place that the Allies will choose. They did so in Italy.’’ Because Rommel thought this would be the place where the Allies would start their invasion into Western Europe, he had ordered that the strongpoints needed to be reinforced and better defendable in order to keep the Allied soldiers pinned as long as possible on the beach. This was crucial to the German defence, because when the Allies were able to establish a beachhead inland, the Germans would not be able to push them back into the sea.

So the Germans began to fortify their positions and knew exactly how best to use their weapons in this fortified position. So when the men from L Company got the signal that the ramp would be lowered and that they were to debark from the landing craft, the Germans opened fire with their deadly MG-42 machine guns and the leading men were cut down as they attempted to get off the boats. Those who were able to leave the LCA, would get into chin-deep water which caused some of these men to drown due to their heavy load of equipment. But the fortunate ones, now had to cross 180 meters of beach, where the Germans were able to see their every move and target them with effective artillery and small arms fire. To make it even more difficult, the men weren’t able to run to the cliffs, because, again, they were so heavily loaded down with equipment. Captain Armellino said that he lost a lot of green soldiers, because they had no fear and failed to hit the ground every few yards. The battle hardened veterans did, however, knew what to do and hence more of them survived the landing. But some men would not be able to hit the ground every few yards, they had to run to every soldier that was hit. These men were the Battalion medics and were determined to save as many lives as they possibly could. Armellino thought that of the 200 men he had, only 125 made it to the cliff. Within these 125 men were also men from E Company, 116th Infantry Regiment of the 29th Infantry Division, they just landed on the wrong spot of the beach and had become entangled with elements of the 16th Infantry. Moments later, while Captain Armellino was reorganizing his company, he was hit and wounded by shrapnel. His wounds were severe, an artery in his leg was cut by fragments from the shell. So while he was fighting for his life, the command of the company went down to First Lieutenant Cutler. 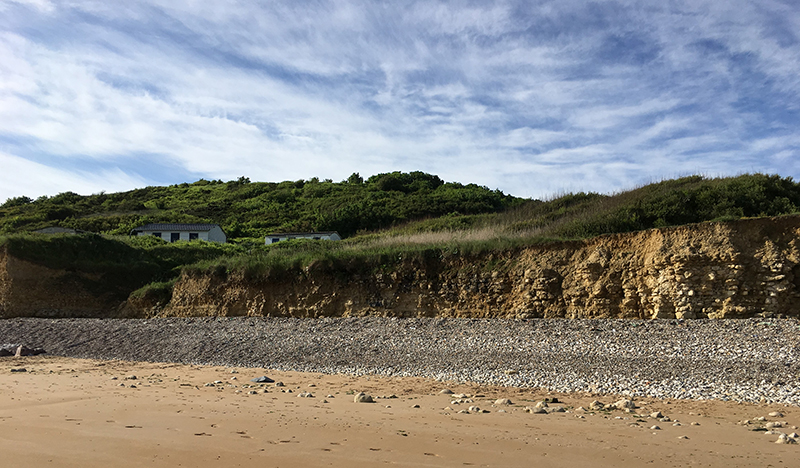 Today, the sand stone cliffs near the edge of the beach are still visible.

Short after the arrival of L Company, LCAs with men of K Company started to arrive at Fox Red. These men also had to face the same conditions and whithering fire as L Company had before them.  One of the lucky men from K Company, who was able to reach the shelter of the bluffs underneath WN-60, was Lieutenant Leo Stumbaugh. While he was trying to reach the cliff, he felt that he would die on that beach and recalls seeing the faces of his wife and his mother before him. He followed the sight of their faces until he got up the beach and reached the cliff, where he was able to find some shelter from the enemy fire.  The cliff was a dead spot for the WN-60’s field of fire, so it gave some protection for the GIs against the deadly firepower of the German machine guns. But the Germans knew this and they had prepared their mortars to zero in on this area of concealement. Their mortar fire was very intense and it was not only the fragmentation of the shells that caused casualties, but also the the stones being blasted into shrapnel with each impact.

The men looking for cover underneath the protection of the cliff knew that there was only one way forward and that was to get over the high embankment in front of them. This embankment leads inland  up an open draw known as Exit F-1.  But the German defenders had sealed the area off with barbed wire and anti-personnel mines. They also enjoyed a good field of fire from their strongpoint on top of the cliff.  This made the draw a poor position to start an inland assault, but this was the only way out for the men of L and K Companies.  The men began their assault inland under the command of Lieutenant Kellman, who organized the attack and sent the men in diamond formations up the draw. The men got some extra fire power from two Sherman tanks from the 741st Tank Battalion, but the men were not able to communicate with the tank crews effectively because they had ‘buttoned up’. So one GI of L Company had to take the task upon himself, and, under heavy enemy fire, guided the tanks in the right direction. This task was taken on by First Lieutenant Jimmie Monteith Jr. He left the cover of the bluff and ran to the tanks, started banging on the sides of one tank, yelling to the men inside. He pointed out where he wanted them to lay down supporting fire. With this accomplished, he ran back towards his men. He then ordered his men to use Bangalore torpedos in blasting a gap in the barbed wire. This was done by one of his non-commissioned officers (NCO), Staff Sergeant James A. Wells. While Wells led his men through the gap, he laid down covering fire, so that his men were able to storm through it and find cover. From his position, Monteith studied the situation and decided to go back down the beach, to retreieve the Shermans. While being completely exposed to the heavy enemy fire, he was able to direct the tanks through the minefield into a more suitable firing position.  It was for these actions that he earned the Medal of Honor. 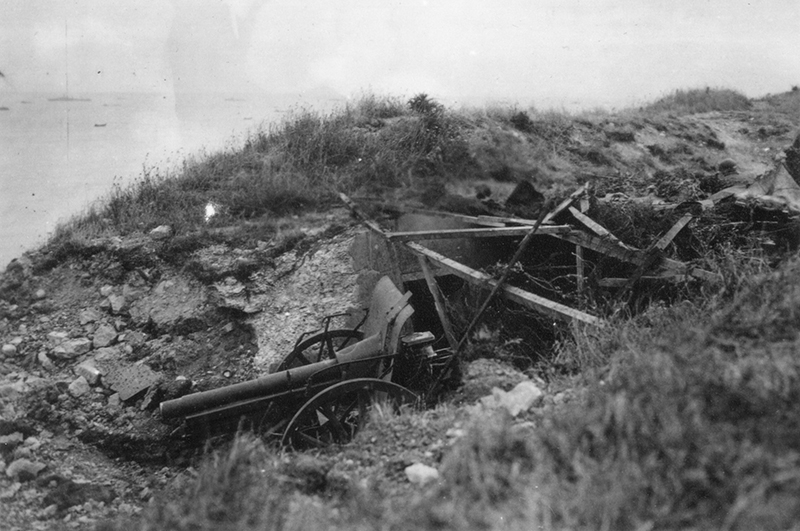 While working his way up the draw, other sections of L Company were doing the same. The men from L Company were now able to make their way up the draw and were able to fight the Germans on WN-60. Then, for a good coordinated assualt on WN-60, Captain Richmond of I Company, 16th Infantry Regiment, took control of the command structure with 104 men from several different companies. With the fire support of the two Sherman tanks and from the destroyer USS Doyle, Captain Richmond reorganized his group and marched off towards the valley of WN-60, to support the attack that Cutler’s platoon had already mounted around 0830 hours.

After the bombartment from the USS Doyle and when the two Sherman tanks ceased, the men from L Company attacked the enemy position from below. They were covered by the fire of BAR’s and light machine guns.  At around 0900 hours the fighting for WN-60 was over. The men from L Company took 31 prisoners and this was the first strongpoint to fall into the hands of the GIs. This gave the Americans on Omaha Beach an important overview of the entirity of Omaha Beach, and a way inland.  Their next objective was the capture of Le Grand Hameau and Cabourg. 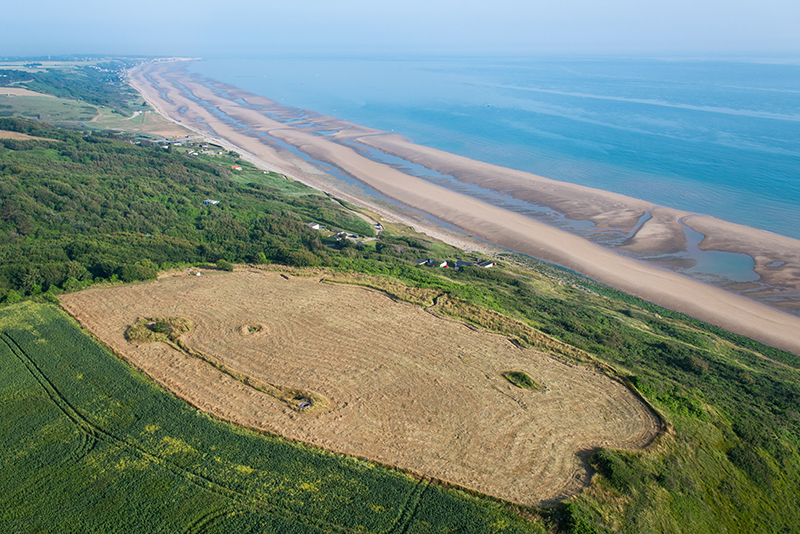