The Harz Mountains, located in central Germany, had Allied Intelligence concerned over the possibility it would become a redoubt for German forces, allowing them to regroup and rebuild their withdrawing units. The region had been established as the Harz-Fortress by Heinrich Himmler in March 1945, who moved several Waffen SS Divisions and numerous Volkssturm units into the mountainous region. The Volkssturm was a German militia that had been formed, similarly to the British Home Guard, as a last line of defence in Germany from those deemed too old or unfit for service in the regular army. From an attacker’s point of view, the terrain was almost impassable; heavily wooded and hilly, with the roads and trails so closely hemmed in that roadblocks required only a few men with axes to construct. By early April, U.S. units of the First Army had begun probing into the Harz Mountains, with the First Infantry Division entering the mountains on 11 April 1945, the 16th Infantry Regiment experienced heavy fighting throughout the mountains in an attempt to dislodge the German units holed up there. Seven days after entering the Harz Mountains, elements of the 16th Infantry reached the town of Rübeland.

Rübeland was defended by a mixed force of Volkssturm units and elements of the 1053rd Regiment of the ‘Infantry Division Potsdam’ which had been formed from the remnants of several German Divisions, including the 85th Infantry Division. The task of taking the town fell to the First Battalion of the 16th Infantry Regiment, with the attack planned for 18 April 1945. The plan called for two companies to advance from different directions with a third company held in reserve. Company B would advance along the Bode River on the left flank of Company C, who would move up the main road into town. Company A would be held in Battalion reserve, ready to be brought forward should they be needed. The focus of this article will be on B Company’s route of attack, drawing from numerous primary and secondary sources. 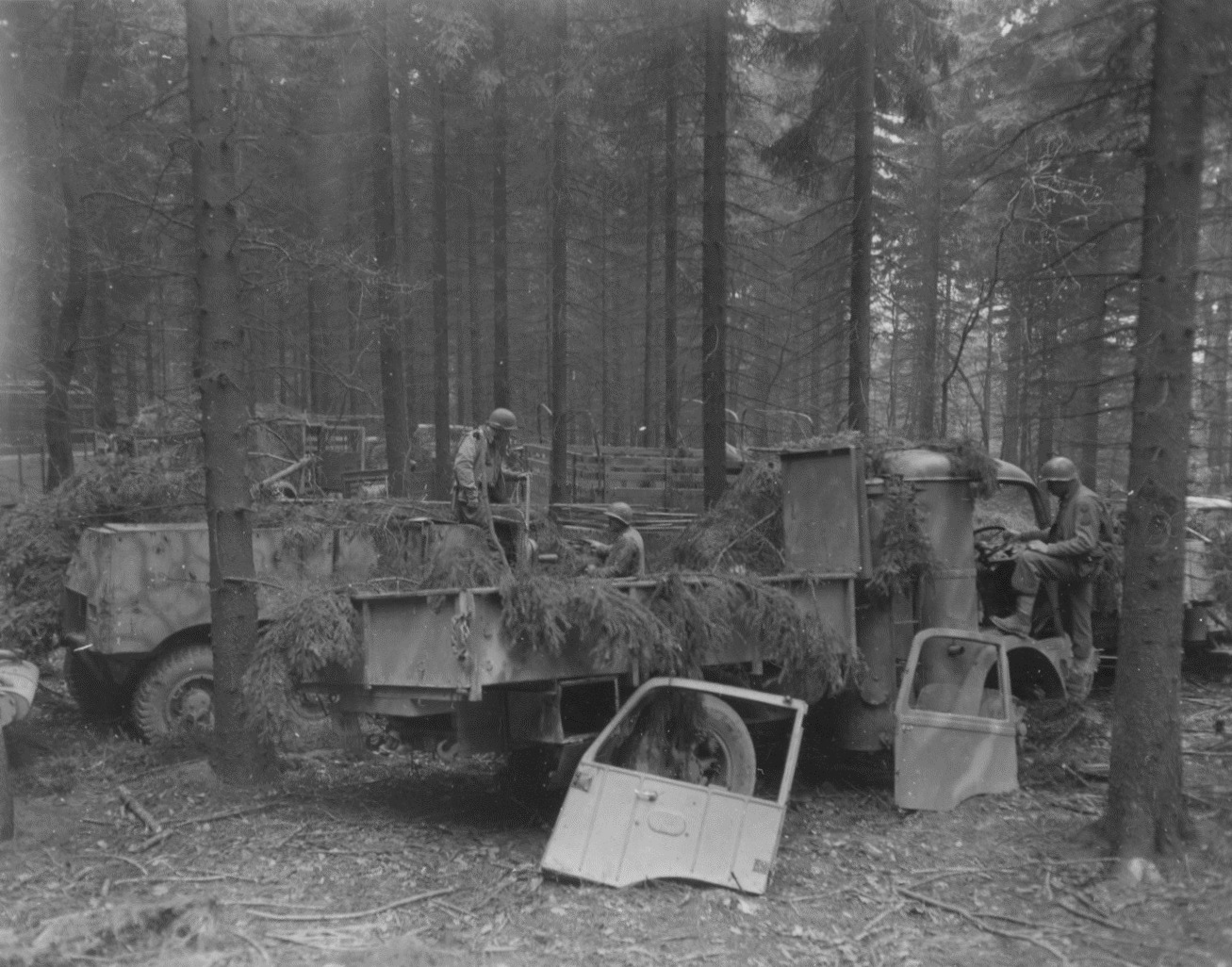 At 0700 hours on 18 April, Company B crossed the line of departure (LD) at the North-Eastern edge of Benneckenstein, keeping to the left side of the main road, with Company C on the right. Both companies followed this route for roughly two-thousand yards before Company B swung north and then north-east towards a clearing, denoted ‘point X’.  The plan called for B Company to move through ‘point X’ and attack the town from the south-east, whilst C Company moved along the main road with a platoon of Sherman tanks and enter Rübeland from the south.

At around 0815 hours, B Company left the main road as planned and proceeded towards ‘point X’. The terrain became densely wooded and visibility was drastically reduced between the advancing platoons. The company moved through the woods in four columns, with the weapons platoon following in reserve. After walking through the forest for forty minutes, the lead scouts came to a large clearing which marked ‘point X’ and the company spread out along the treeline on the edge of the clearing. This open space left the company very exposed for miles around due to the hilly terrain that denoted the Harz Mountains, but due to poor maps and the danger of becoming completely lost in the thick woodland, there was no choice but to continue through the clearing. Several squads sent scouts into the clearing and they cautiously advanced towards the treeline on the other side. Minutes after entering the clearing, the scouts and waiting platoons were hit by a storm of enemy rifle and machine gun fire, as well as several German rockets from their portable rocket launchers, called Panzerschrecks, that burst amongst the trees and showered splinters down on the American GIs. It was not clear where exactly the fire was coming from so the infantrymen immediately became pinned and returned fire in the general direction of where the fire was coming from. The firing came to a halt as quickly as it began and an uneasy silence settled across the clearing. The company commander, First Lieutenant Lawrence W. Stricklin from Cullman, Alabama, stepped out into the clearing and called out to the German defenders to surrender. A single shot rang out and Strickland fell, mortally wounded in the chest by an enemy rifle. The company’s executive officer, First Lieutenant Harvey Hanna, rushed to the front of the column but Strickland was dead by the time he arrived. 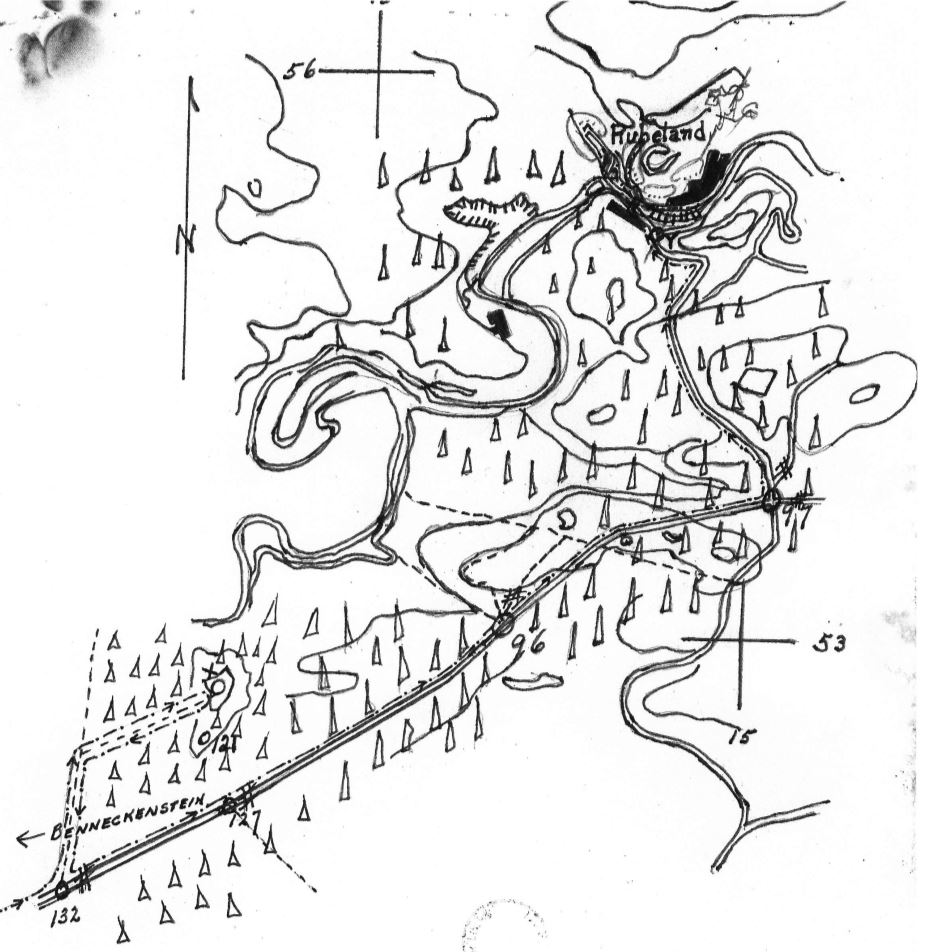 This map and route of attack was produced for the B Company After Action Report of the attack.

The situation that confronted Hanna was this. Only one officer besides himself remained in the company and this officer had only seen four days of front-line action since he joined the company. To attack the enemy on the other side of ‘point X’ would be suicidal. Everything indicated that there was simply too much opposition for one unsupported company out of contact with friendly units to handle. Hanna also had to consider the morale of the company, as it had been severely reduced with the death of Lieutenant Stricklin, who was very well liked by his men. To make matters worse, the battalion commander could not be contacted and time was running out, the company would have to act before it became pinned down and unable to support C Company in the attack on the town. Lieutenant Hanna decided to get in contact with Captain Lycas, commander of C Company. Together they worked out a plan that would have B Company work its way back to the main road and move north to link up with C Company, who had ran into some determined opposition along the main approach to Rübeland, and the idea of using the companies together would provide a great deal more safety in their greater numbers.

The two companies linked up along the main road, placing B Company on the left side and C Company along the right. The terrain on the left-hand side of the road was much easier to traverse and quite flat, whereas the ground covered by C Company contained hills and valleys which caused the advance to slow down. C Company was held up by enemy fire whilst moving through the woods on the right side of the road, therefore B Company moved on in an effort to outflank the enemy positions. Despite the rapidly executed manoeuvre, the GIs could only find German troops in small groups and it appeared most of them had pulled back towards the town. The two rifle companies continued their advance down the main road and were getting closer to ‘point 97’ where the advance would swing north off the main roadway and head into the town. It was around here that the platoon of four medium tanks returned to join the rifle companies. Shortly after linking up with the Shermans, the Americans ran into a strong enemy roadblock at ‘point 97’. Heavy machine gun and bazooka fire quickly pinned down the attacking platoons. One of the tanks moved forward and drew a great deal of enemy fire away from the infantrymen that were desperately seeking cover either side of the road. The tank then began firing several rounds of canister shot into the roadblock at point blank range, tearing through the German defenders. This brief respite in enemy fire allowed Lieutenant Roderick Ellis, whose machine-gun platoon was attached to B Company, to setup a section of guns on some higher ground overlooking the roadblock and began laying down effective suppressing fire onto the enemy positions in the woods around the roadblock. Despite the overwhelming amount of firepower being directed against the roadblock and surrounding positions, the German troops were still holding on and even forced the tank to pull back after some narrow misses from several Panzerfausts. A plan was quickly devised where the tank would rush forwards and fire more canister rounds into the woods, supported by Lt. Ellis’s machine guns. Whilst the enemy was suppressed, C Company would then rush the wooded edge of the roadblock and clear the enemy positions as they moved north, which would then allow B Company to continue their advance. This plan was quickly put into action and executed to perfection. The enemy positions were rapidly overwhelmed and cleared by the rifleman and soon both companies were moving steadily up the last approach to Rübeland. 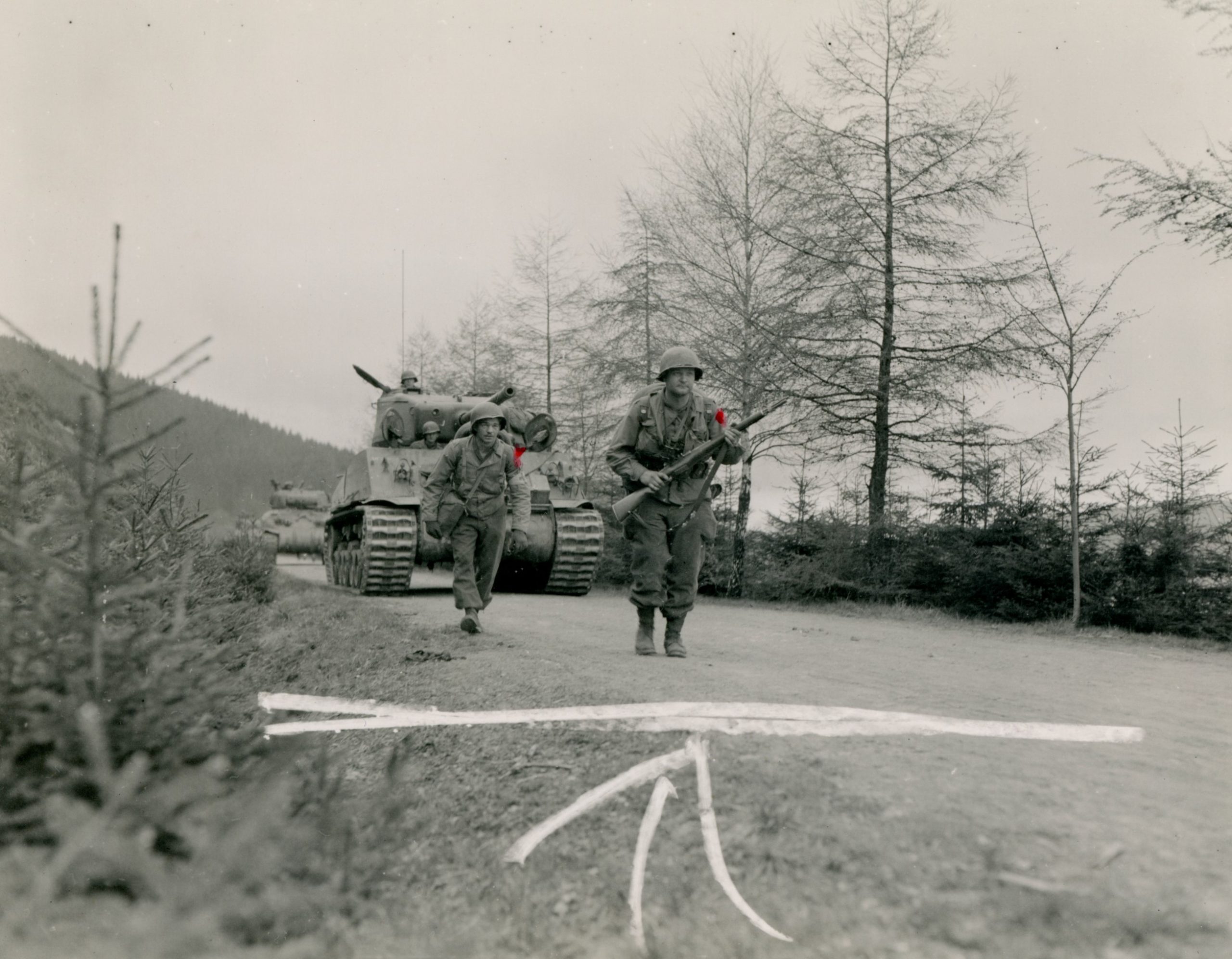 Sgt. Ronald Myers advances down a road towards the German town of Riefensbeek, 14 April 1945.