Until the spring of 1940, little had been done by the U.S. Army to train and equip American soldiers for mountain fighting. However, when the Soviet Union launched a frigid attack on its vastly outnumbered neighbor Finland, the Finns, veterans of winter warfare for centuries, put on their skis and white parkas and struck back savagely, and with surprising effectiveness, in subzero cold.

Taking note of the Finnish success, National Ski Patrol founder Charles “Minnie” Dole tirelessly petitioned President Franklin D. Roosevelt and Army Chief of Staff George C. Marshall to create a specialized Army unit that was capable of operating in cold weather and mountainous terrain. General Marshall supported the idea from the beginning, so he agreed to meet with Dole, and a tentative appointment was scheduled for September 10, 1940. Marshall listened attentively to Dole’s arguments on the need for winter training and promised to get back to him “one way or the other.” And he did get back to him. Dole’s lobbying paid off. The Army announced its plans for winter training in early November, and a directive was sent to five Army division commanders shortly thereafter.

According to this directive, which was issued by the War Department on December 5, 1940, “Troops located where considerable snow may be expected, will be given training with skis and snowshoes.” The training was to be carried out with the objective of testing the ability of one or more battalion(s) of each division located in the northern areas to maneuver in deep snow and in keeping with the idea of providing more advanced training to small groups of selected individuals organized into patrol units “for the purpose of operating for sustained periods of time under all weather conditions and on all types of terrain.”

Under the command of Colonel James I. Muir, the 26th Infantry Regiment (less the 2nd Battalion) was designated as the unit of the 1st Division to conduct ski training. Training was conducted at Plattsburg Barracks, New York, and in addition, for a period of seven days each, a detail of ten officers and one hundred enlisted men was sent to Lake Placid weekly under Rolf Monson, the 1924–1928 U.S. Olympic team coach and head of the Lake Placid Ski School. Nine such details were sent, training approximately one thousand officers and men. Three officers and fifty-three enlisted men were formed into a ski patrol, which attained a high degree of skill. 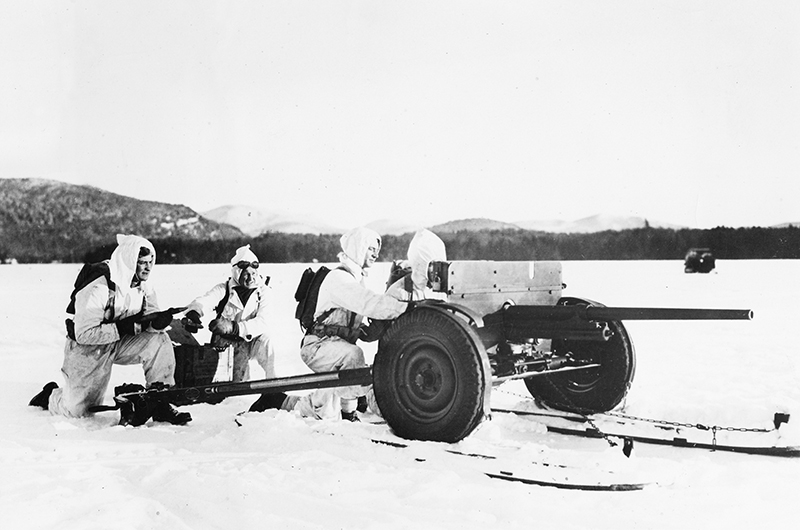 Ski troops of the 16th Infantry fire an anti-tank gun that has been mounted on skis.

Training was terminated on February 28, 1941, by lack of snow and permanent change of station. Colonel Muir summarized lessons learned:

The problem of teaching troops to ski is comparatively simple. Young men of good physique, particularly those with well-coordinated sense of balance, can become an expert on skis in a relatively short time. The major problems are those of supporting weapons, ammunition, evacuation, and supply.

In conclusion, he stated: “I believe that ski training is an asset; like the Texan’s six-shooter, you may not need it, but if you ever do, you will need it in a hurry, ‘awful bad.'”

Although the 26th Infantry Regiment was officially designated as the main ski unit of the 1st Division, some portions of the 16th Infantry Regiment, under the command of Colonel Henry C. Cheadle, also began tactical training on skis at Lake Placid on January 9, 1942. Other units that took part in ski maneuvers were the 1st Engineer Battalion and parts of the 28th Infantry Regiment, which was now under the command of Colonel Alexander N. Stark Jr. Stark had succeeded Theodore Roosevelt Jr., who had recently been promoted from Colonel to Brigadier General.

The entire effort was experimental in nature and was not intended to create trained mountain and winter warfare soldiers. Its primary purpose was to serve as a testing ground for future training, and by the end of April 1941, the Army deemed the ski patrol experiments a success and disbanded the units mainly due to a lack of snow. But it would not be long before the first U.S. Army mountain ski unit was created: on October 22, 1941, General Marshall authorized the 1st Battalion of the 87th Mountain Infantry Regiment, the first mountain regiment in U.S. Army history.