During an informal ceremony on July 2, 1944, General Dwight D. Eisenhower decorated twenty-two men of the 16th Infantry Regiment with the Distinguished Service Cross “for extraordinary heroism in action against the enemy on 6 June 1944 in France.” Eisenhower also presented the Legion of Merit to two others that day. As the men stood at attention on the lawn of a gray, old chateau near Balleroy, France, jeeps carrying Generals Eisenhower, Bradley and Gerow stopped before their ranks. The three generals stepped out and shook hands with Major General Clarence Huebner, who commanded the division at the time. Then, an officer began reading the names of the men receiving awards. As General Eisenhower walked down the double rank, he spoke a few words to each man, asking him his job and where he was from. After pinning on the medals, the Supreme Allied Commander called the group around him. “You are one of the finest regiments in our army,” Eisenhower said. He continued: “I know your record from the day you landed in North Africa and through Sicily. I am beginning to think that your regiment is a sort of Praetorian guard which goes along with me and gives me luck. I know that you want to go home, but I demanded if I came up here that you would have to come with me. You’ve got what it takes to finish the job. I am terrifically proud and grateful to you. To all of you fellows, good luck, keep on top, and so long.” 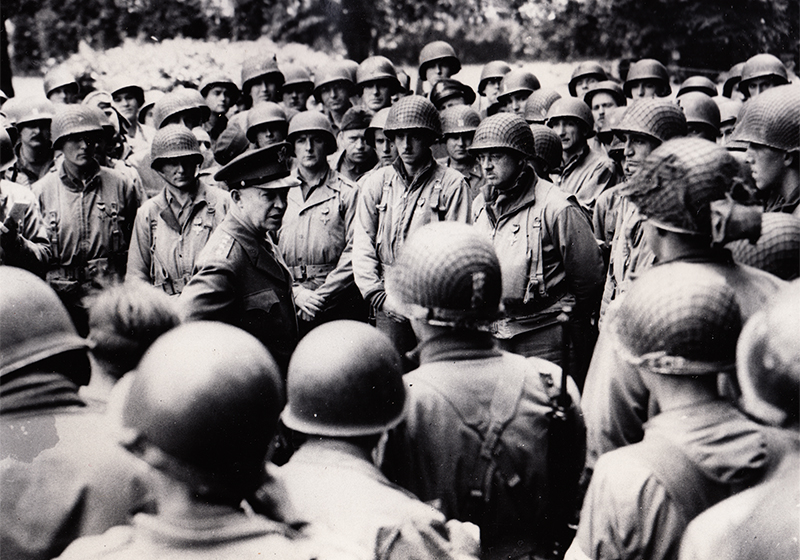