The Netherlands American Cemetery is located on the beautiful hills just six miles east of Maastricht, The Netherlands. It is the only American military cemetery in the country, and it is often called “Margraten,” after the nearest village. Here rest 8,301 American servicemen and servicewomen. In addition to those who rest here, the names of 1,722 soldiers are chiseled into the Walls of the Missing. Most of these soldiers were killed in action either during the airborne and ground operations to liberate eastern Holland or during the advance into Germany. It was at this cemetery, shortly after it was erected in 1945, that people began tending the graves of American soldiers. This was the start of a phenomenon that can be found nowhere else in the world on such a large scale.

The original idea of adopting the graves of the American liberators came from a local pastor and a city clerk in February of 1945. Soon after, a committee was created “to do as much as is currently possible for the fallen allied soldiers.” At the second Memorial Day service in 1946, every grave in Margraten was adopted. Today, some 70 years later, all 8,301 graves are still adopted by a Dutch, Belgian or even German family, as are all the names on the Walls of the Missing. There is even a waiting list for the many people who want to adopt a grave as soon as one becomes available. Other overseas American cemeteries now have similar adoption programs, but Margraten is the only one where each grave has a caretaker and a waiting list. 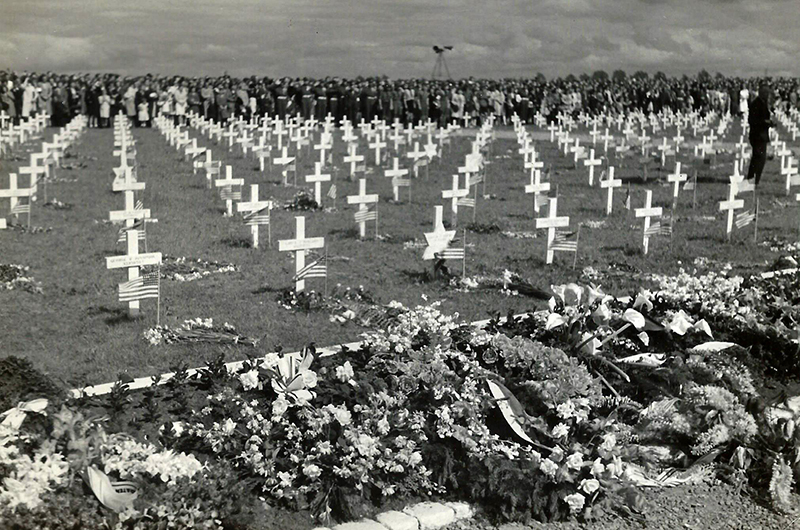 Memorial Day at Margraten, the Netherlands, in 1946.

I have adopted the name of Private Hampton Buzzard from the 16th Infantry Regiment, who is honored on one of the two Walls of the Missing in Margraten. He was last seen on November 17, 1944, in the vicinity of Hamich, Germany—his fate unknown. Private Buzzard was officially declared killed in action one year and one day after he was last seen. I have also adopted three graves at another American cemetery in Belgium. I try to learn as much as I can about these soldiers, and I visit the cemeteries three or four times a year to place flowers on the graves I have adopted. It has become my personal mission to ensure these individuals are never forgotten. Adopting their graves is the least I can do. As former President Obama put it, “It’s a debt we can never fully repay, but it is a debt we will never stop trying to fully repay.” I could not agree more.

For me—and I think I speak for every grave adopter—adopting the graves of the men and women who gave their lives not just for their country, but also for our freedom, is the greatest honor of my life. Whether these soldiers were called private or general, mom or dad, son or daughter, to us they are all heroes—and we honor them all. But perhaps the best way to honor those who died is to use the lessons of the past to carve a better future and prevent a future battlefield cemetery. This we owe to them.